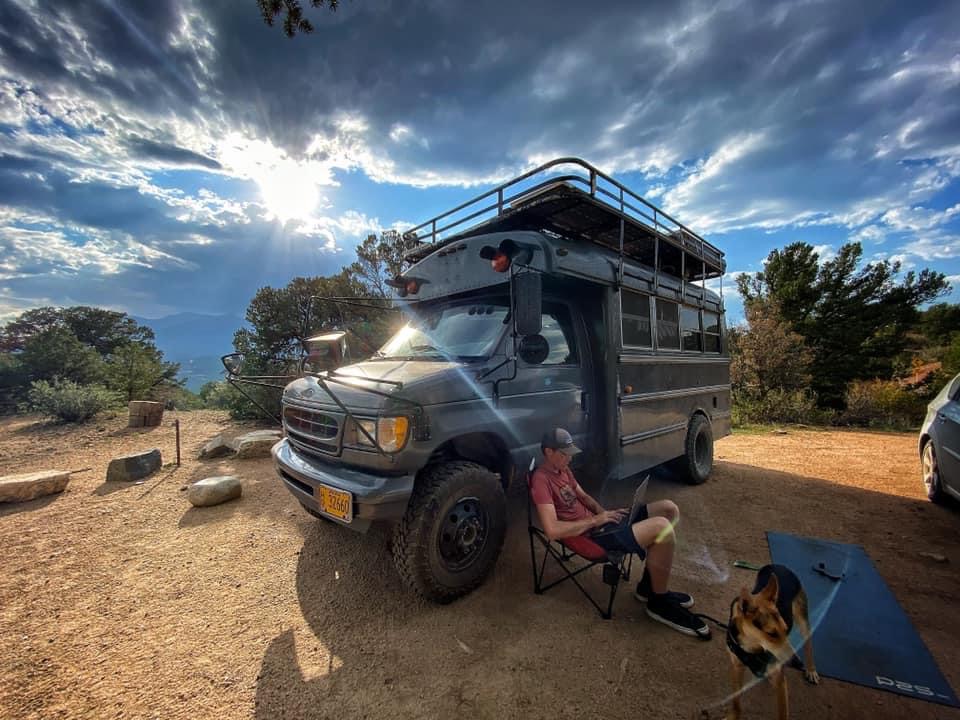 43% of cities in the country prohibit sleeping in your car. A fact I had no true knowledge of before beginning our life living in a 18 foot Thomas school bus. We honestly assumed if we were quiet, left no trace, and moved along when the sun rose that we could simply exist among the trees. And yet that familiar conversation appears at our door.

No you can not stay here.
No there is no where you can go.
No I can not help you. But you must go.

How did we get to this position where even everyone’s usual safe crash pad of Walmart is now banning overnight parking? Recently we were asked to move finding out truck stops such as Pilot’s where weary truckers rest their heads have security guards in certain cities politely asking them to move along. Well, the short answer is the few of us who have overstepped, overused and taken advantage of free places to park; have cemented the death of boondocking for the many of us who partake of vanlife.. Unfortunately it is those who do not choose to dwell in their vehicle but have no other options that suffer the most from our privileged choice to be wild and roaming.

Is hope lost? I really do not believe that. As our movement grows to use less, roam more and take the road less traveled; I one hundred percent think we as a collective can repair our reputations of users and abusers.

As Smokey the Bear says, ‘only you can prevent forest fires’. Honestly, unless at an established campsite, leave your roasting marshmallows to your stove top burner.

Pack it in and pack it out.

I can not scream this one loud enough. The most horrific impact of boondocking is the litter left in our wake. What if instead of adding trash we made a system to always pick up a bag of trash from where we dwell. This principal also stands to grey water from washing yourself and your dishes. Not only are you healing the land but the movement of positive impact would say much more than words that we are not a bad group of misfits.

I was recently involved in a conversation about the impact of light pollution. As much as it’s enjoyable to watch an outside movie or have a massive light bar; your neighbors, may not feel the same way. Nocturnal animals sleep during the day and are active at night. Light pollution radically alters their nighttime environment by turning night into day. Artificial lights disrupt this nocturnal activity, interfering with reproduction and reducing populations. So cover your windows, dim the lights and enjoy the stars instead.
Use the restroom the decent way.

What do I mean by that? Well, first off toilet paper streaming in the wind is not as lovely as it sounds. Always pack those babies out or use a Kula cloth. A good rule of thumb is you do not want to smell, step in, eat, or drink poop. As annoying as it may be if it’s cold, windy or raining still dig catholes that are 8 inches deep, and cover with soil. Placing a rock on it is a no no since it stops air flow which is a vital aspect of decomposition.

These are really just the beginning of the discussion of leave no trace and revamping our image in society as homeless bums who take and take and never give back. Let’s start a movement not only to wander free but to wander healing. There is hope. We can change the world guys one home on wheels at a time.