Ice Hacks Of The Climbing Kid 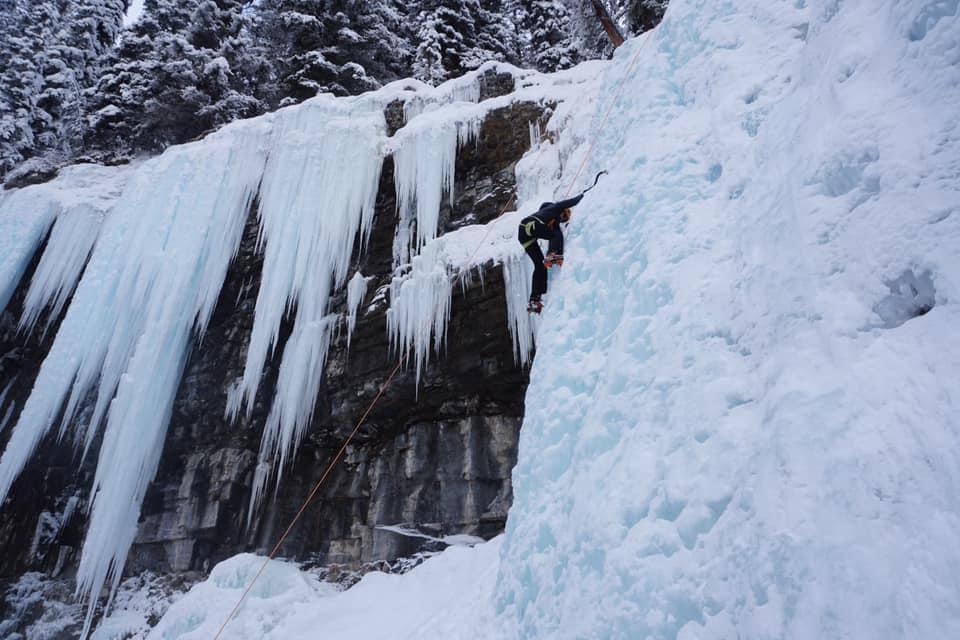 Every year my husband and I embark on a trip I have lovingly coined – ‘Honeymoon Trip’. Not to be confused with an actual traditional honeymoon. No my husband, whom I refer to as the Tall One; and I had a lovely seven day honeymoon to Athens, Greece starting the day after our wedding day almost 14 years ago. No; when I speak of a ‘Honeymoon Trip’; it is something quite different. This new yearly tradition perhaps would make more sense perhaps if it was called the – ‘leave the kids somewhere safe and run as far away as possible to get some marriage one on one time’ – trip. Because that is exactly what it is. The ‘Honeymoon Trip’ is a trip with just the tall one and I each and every year to some new adventure sans the children.

Some of our honeymoon trips have including bike rides around the Italian countryside, Sumo wrestling championships and climbing as many mountains over 14000 feet in elevation I could drag our thin air struggling selves up in the Colorado Rockies. We have been to so many adventures in both the culture and outdoors way that each new year is perhaps a test in what craziness I can convince my husband would be fun next.

This past year came around with much chaos for our family. We faced personal obstacles and decided to move into a short school bus converted into a home to cope. My usual over planning for the year trips had flown completely out of the window as I sat beside my husband in our 18 foot home on wheels watching the rain pour outside our windows in the Pacific Northwest Mountains where we had found ourselves immersed in. It was October. We had not planned our getaway trip. We had limitations on time and travel. I was cold and anxious as I scrolled through my social media looking at images of gorgeous people in gorgeous places having the most gorgeous times when I stumbled upon a location that caused my thumb to pause. ‘Want to go to Banff?’

The tall one looked at me with genuine confusion in his eyes. In his mind we had been winding down for the night. Our two children tucked in their hammock and Japanese mattress bed respectively in the back. Our dingo dog curled up on both of us releasing fur everywhere to be had. And we were slowly waiting for the rain to rest with hopes that tomorrow would bring much elusive sun. I had broken this calmness with my anxiety filled squeak asking to go to a place or a thing or a adventure he had not seen coming in this serene evening scene. I started my off the cuff presentation of my newly and firmly decided choice that we would go to Banff this year for our honeymoon. The tall one smiled and nodded and waited for me to sputter out my rambling to calmly ask once more – ‘But sweetie, what is Banff?’

Banff is a lovely resort tourist focused town located in the boundaries of Banff National Park in Alberta, Canada. At about 5,000 feet above sea level; Banff is the community with the second highest elevation in Alberta after its near by neighbor Lake Louise. This town is known for its mountain surroundings, hot springs, and extraordinary opportunities to get outside and explore. The surrounding 2,509 square miles of parkland are home to wildlife including elk and grizzly bears.

As I researched activities and trails to trek, the popular skiing activities kept dominating my tourist blogs. Skiing sounded fun I thought yet I had never been, I also did not want to shell out the needed funds for things like googles and lift tickets and was not sure if I would appreciate the crowds among the bunny hops. I prefer empty spaces to crowded lodges. But if we were going to be in a skiing epicenter I thought perhaps we could give it a try as I added it to the potential list of holiday fun. I was not satisfied though and continued my scrolling website after website until – Rockies Ice and Alpine – illuminated my tiny phone screen. There it was. There was my big ticket to an extraordinary honeymoon to surpass all the incredible journeys we had taken prior. Ice climbing. We were going to Banff. We were going to Banff to climb some ice.

‘Want to climb some ice?’

I waddled down the street in my layers upon layers of warmth. The snow drifts reached my hips as I tried to activate the hot hands I had shoved in my gloves. We had made it to Banff the day right after a furious snow storm had dumped buckets of snow that left the area a truly winter wonderland. My Floridian vibes were not accustomed to below zero temperatures but I was doing my best with three layers of long Johns and two oversized puffy jackets. I was ready. Or at least I was stuffed so much in fabric that any fall from any height would result in a lovely landing of down feather softness.

We were supposed to meet our guide from Rockies Ice and Alpine at 8:45am outside a popular cafe in Banff. I was not sure exactly what I had signed us up for as I signed away legal recourse and proved that we had current medical insurance just in case. As I rounded the corner I spotted a tall and kind smile in bright neon green pants and a turquoise jacket holding a warm drink with a friendly hello. He introduced himself as Kris. He was the owner, guide, climber extraordinaire that would teach us all about ice climbing. We piled into his truck and headed out to chase some waterfalls.

But what exactly is ice climbing? I am sure with the popularity of movies such as Free Solo and Dawn Wall; rock climbing is not as foreign at least in awareness. But what is ice climbing and how is it similar or really how is it different to rock climbing? Ice climbing is, in its purest form, the activity of ascending inclined ice formations. Usually, ice climbing refers to roped and protected climbing of features such as icefalls, frozen waterfalls, and cliffs and rock slabs covered with ice refrozen from flows of water. If you imagine the movie Frozen in all its ice castle glory, add two curved axes, helmets and ropes – you have a pretty good concept of ice climbing.

Since neither one of us had the knowledge, skills or gear to ascend frozen formations, we hired Kris Irwin from Rockies Ice and Alpine to show us how to climb safely and literally be the guy to hold the ropes for us.

Johnston Canyon was carved steeply into the limestone bedrock by thousands of years of water erosion. This magical place in Banff National Park is comprised of overhanging canyon walls, waterfalls, the deep pools of Johnston Creek which runs through it. Walking among catwalks perched upon the rocks above the creek makes this location incredibly popular in the summer months. But in the winter wonderland the crowds thin as the ice thickens. And this was where we were going to embark on our ice climbing expedition.

We walked past tour groups sipping hot cocoa from their guides mugs. I hoisted the bag up higher on my back that contained our helmets, harnesses and crampons. The ice walk among the canyon was truly breathtaking as I snapped photos of blue diamond icicles nestled in snow covered pines. Finally after a mile and a half we reached the end of the catwalk to look upon the most gorgeous waterfall I had ever seen frozen in time upon the canyon wall. With a smile Kris informed us this was it and began to jump over the railing to slide to the snow covered ground below.

Is ice climbing hard? I read if you can climb a ladder you can ice climb. And truth be told the entry level climbs are in line with that philosophy. Similar to learning any new skill the first tries are awkward and daunting. But with the right instruction and a heart to have a good laugh you find yourself truly enjoying a sport you may gasp at on social media.

Kris calmly set us up to stand in front of some practice ice. One arm throw, catch a good hole, throw the other axe in. Dig one foot hole. Triangle out to dig anther one. Butt out, legs bent, straighten up, hips in. This dance of kicking and throwing we practiced again and again until finally ready to ascend upon the waterfall. Kris went ahead easily climbing up the wall to set into place hooks and anchors. As he laid the ropes in place I shifted from foot to foot to find feeling back into my toes. A crowd had gathered on the platform to watch. My nerves neared my throat as I reminded myself I was the main motivator on this adventure.

I volunteered to go first as I adjusted the strap on my helmet. Here goes nothing I sighed as I stumbled to find footing at the base of the waterfall. One throw, axe in. Two throws, axe in. Kick one foot. Kick the other foot. Butt out, legs bent. Straighten up the triangle and hips forward. I slowly crawled my way up the waterfall as my arms ached and my fingers tingled. Yet there I was. Roped in high above the canyon floor as I listened to the rushing of water below the ice. I looked down to catch the glimmer in the tall ones eyes. I was doing it. I was actually doing it.

And I was absolutely in love.

We ended that day cold, tired but on a endorphin high of bliss. That night I contacted Kris to set up a second day of climbing at the Grotto Canyon area – we loved the experience that much. I left Banff with memories of a truly incredible Honeymoon Trip and a new outdoor passion under my belt. I am not sure when I will have the opportunity to ice climb again but I most certainly will when the opportunity presents itself.

Try it yourself! Just contact my buddy Kris at Rockies Ice and Alpine.
Be prepared for epic greatness.